No booking fees!
FREE cancellation in most cases! 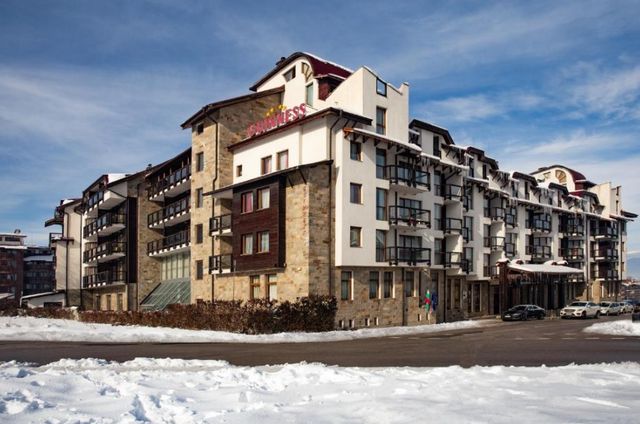 The modern MPM Hotel GUINNESS is situated in a serene and quiet area only 200 m. from the Gondola lift.

The hotel offers an elegant restaurant, the mehana* in the traditional Bulgarian style, Sports bar (Sky TV, billiards, darts) and an unique atrium, the steam bath, the sports fitness hall, the swimming pool and the spa centre in the hotel. The open air parking lot is free of charge for the hotel guests and the heated garage is subject to a local charge.The hotel offers also free Wi-Fi in the public areas, video games, billiard and table tennis.

The hotel has 38 studios, 13 large apartments, 41 small apartments and 27 messonettes that satisfy the guests with the modern luxury and comfort. There is a digital TV, an internet connection, a telephone, a kitchenette and a luxury bathroom with a bath, a phone and a hairdryer.

Food and dining, restaurants and bars in MPM Guinness Hotel

Luxury restaurant with capacity of 120 seats. Here you acn enjoy delicious dishes from the european and international cuisine.

You can relax in the Spa centre of the hotel where the procedures will make you feel healthy, will wash out the stress, will give you energy even if they are combined with a massage.

For entertaining and sports activities the hotel offers billiards, table tennis and an internet room.

No booking fees apply. Cancellation is FREE, except for last minute bookings - you can see the terms for free cancellation when you select dates and services.

No booking fees apply. Cancellation is FREE, except for last minute bookings - you can see the terms for free cancellation when you select dates and services.
Price includes free use of: Wi-Fi internet in the hotel, Wi-Fi internet in the rooms, Indoor swimming pool, Fitness, Finnish sauna, Steam bath, Jacuzzi, Billards, Table tennis.
All prices are per room/apartment per day, on Half board basis.
Additional payment for New Year dinner is obligatory.
The additional person discounts are from the regular price per person.
Please, use the booking form, to get a price for your period of stay, number of people and meals included.
The regular prices are NOT valid during national holidays, Christmas and New Year periods!

The price include: free use of indoor swimming pool, sauna, steam bath, ski storage for own equipment, free use of Wi-Fi at the reception area, open air parking space, free shuttle to the bottom station of the gondola lift.